Bank Five Nine is a smaller bank specializing in Refi, Home Purchase, and Cash Out Refi loans. Bank Five Nine has a high proportion of conventional loans. They have a a low proportion of FHA loans. (This may mean they shy away from first time homebuyers.) Their top markets by origination volume include: Milwaukee, Chicago, Madison, Minneapolis, and Racine among others. We have data for 56 markets. (Some data included below & more in-depth data is available with an active subscription.)

Bank Five Nine has an above average approval rate when compared to the average across all lenders. They have a below average pick rate when compared to similar lenders. Bank Five Nine is typically a low fee lender. (We use the term "fees" to include things like closing costs and other costs incurred by borrowers-- whether they are paid out of pocket or rolled into the loan.) They typically have about average rates. 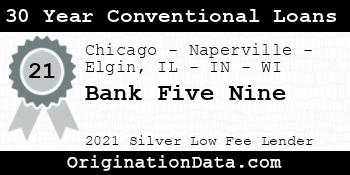 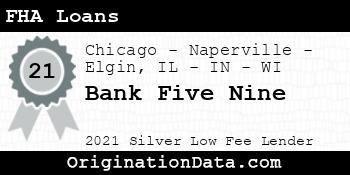 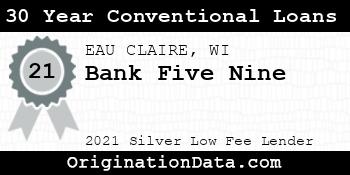 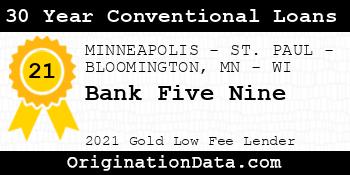 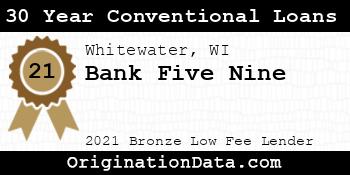 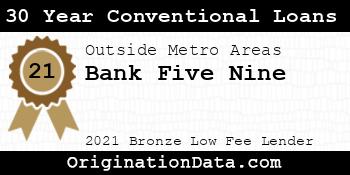 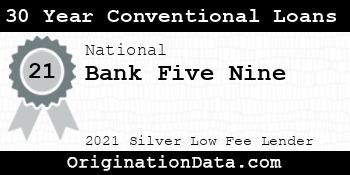 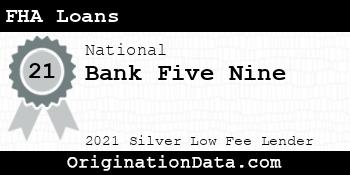 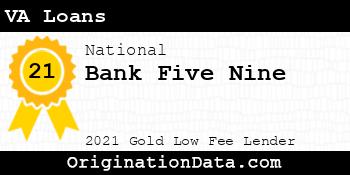 We use machine learning to identify the top lenders compared against Bank Five Nine based on their rates and fees, along with other useful metrics. A lower similarity rank signals a stronger match.

For 2021, Bank Five Nine's most frequently originated type of loan was Conventional, with 2,444 originations. Their 2nd most popular type was FHA, with 91 originations.

For 2021, Bank Five Nine's most frequently cited loan purpose was Refi, with 1,020 originations. The 2nd most popular reason was Home Purchase, with 966 originations.

Bank Five Nine's average total fees were $2,600, while their most frequently occuring range of origination fees (closing costs) were in the $<1k bucket, with 2,131 originations.

During 2021, Bank Five Nine's average interest rate for loans was 3.22%, while their most frequently originated rate bucket for loans was 2.5-3%, with 1,061 originations.

Bank Five Nine lent most frequently to those with incomes in the $100k-150k range, with 603 originations. The second most popular income band? $50k-75k, with 575 originations.

Total approvals of all applications
96.15%

Bank Five Nine has an exceptionally high approval rate. They either target their audience very well or may have lax underwriting protocols.